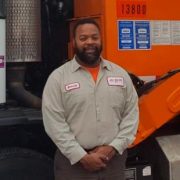 News on MTAC member All Waste, from Fox 61.

A Hartford based trash and recycling company now has bragging rights.

One of their drivers has been awarded with the industry’s top safety award named “Safe Driver of the Year.”

Derrick Belin has had a spotless record for the past eight years driving for Hartford based All Waste, Inc. And, we’re told, he won the award over hundreds of other drivers.

“It’s about just being a safe driver and understanding the business and industry,” Belin said.

Matt Slowik, the Safety Compliance Manager at All Waste said, “We are extremely excited and proud. It’s a real honor (Derrick) won this award.”

Belin was awarded a $1000 prize as well as a five day trip to the National Waste and Recycling Conference in New Orleans, where he received his plaque in front of about 700 people.

Belin said he logs about 1000 miles a week roaming the roads of Portland and Middletown. Belin said the keys to his success on the road are “consistency, determination, and professionalism.”

See the full story, including a video news clip online.

Congrats to Derrick Belin (@AllWaste) for being one of our Driver of the Year winners! See you next week! pic.twitter.com/BQknmZpYW0