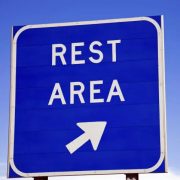 Excerpt from The Hartford Courant.

Two Republican state senators wrote Monday to the Commissioner of the state Department of Transportation, questioning his agency’s decision to close all toilet facilities at seven interstate highway rest areas that commercial truckers use for their federally required rest from driving.

Citing a Government Watch column published in The Courant Sunday, Sens. Toni Boucher of Wilton and Len Suzio of Meriden asked DOT Commissioner James P. Redeker, “Will Connecticut’s highway rest stops become ‘like an open sewer’, as one driver interviewed in the article predicts? If so, what precautions is DOT taking? Will State Police be available to ensure the safety of truckers using these areas? DOT currently intends to spend $300,000 from the department’s reserves to study a potential Connecticut Mileage Tax. Could those funds instead be put toward keeping rest stop toilet facilities open?”

State budget cutbacks have reduced the hours of indoor restroom buildings at the seven rest areas on I-84, I-91 and I-95, which do not have restaurants or gas stations. Since last fall the buildings have been open for only seven hours in the morning and afternoon, and are locked for 17 hours from late afternoon until morning. Portable toilets have been placed there to accommodate travelers during those 17 hours.

But now, under Gov. Dannel P. Malloy’s latest proposal for state budget cuts, the DOT says it intends to lock the restroom buildings 24/7 and pull out the portable toilets, leaving no toilet facilities. However, the department is leaving the areas open for motorists and truckers to pull off and rest, making it likely that some will use the bushes and trees as rest rooms.