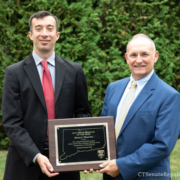 State Senator Henri Martin (R – Bristol) has been named the Motor Transport Association of Connecticut (MTAC) State Senator of the Year, MTAC announced today. This annual award is presented to a member of the State Senate who supports public policy which allows the trucking industry to remain competitive in Connecticut. 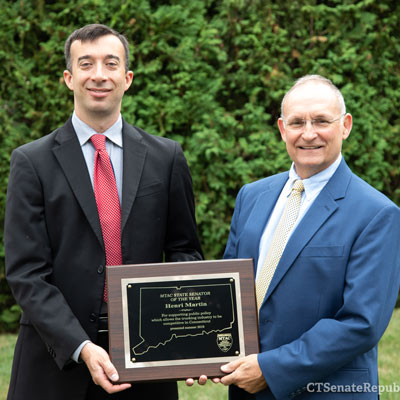 “Senator Martin is a strong supporter of the trucking industry,” said MTAC President Joseph Sculley. “As the Senate’s Ranking Member of the Transportation Committee, he has led the fight against putting congestion-price tolls on our interstate highways, which would have a devastating impact on the trucking industry in Connecticut. This is the kind of support our industry needs,” Sculley added.

“Senator Martin knows that trucking is critical to our economy. Everything we buy was on a truck at some point. So, anything that impacts businesses in the trucking industry, whether it’s delays in getting new trucks registered, or high taxes and fees, the effects will be felt throughout the economy,” said Sculley.

Sculley pointed out that Senator Martin also realizes the trucking industry’s role in financing our transportation system. “He knows that out-of-state trucks do not get a free ride through Connecticut. The pay their fair share, anywhere from $26 million to $30 million per year, through the International Fuel Tax Agreement (IFTA) and International Registration Plan (IRP) programs.” he said.

Sculley concluded by highlighting the importance of the trucking industry. “More than 85 percent of Connecticut communities depend exclusively on trucks to move their goods. Trucks transport 94 percent of total manufactured tonnage in the state. The average 18-wheel tractor trailer pays more than $17,000 annually in state and federal road taxes,” he stated. “The trucking industry plays a crucial role in the Connecticut economy, and it pays a lot of taxes in order to do that.”

“We thank Senator Martin for supporting the trucking industry and look forward to working with him for years to come.”