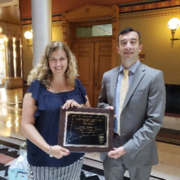 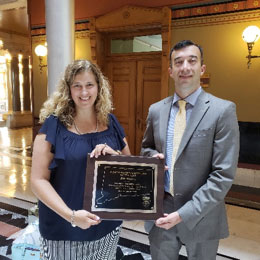 “Representative Barry has demonstrated a willingness to stand up for small businesses in Connecticut, including those in the trucking industry,” said MTAC President Joe Sculley. “She has also shown a commitment to fiscal responsibility, which is needed in the legislature.”

Sculley added that Representative Barry keeps an open mind and considers all aspects of an issue before making a decision. “For example, while Representative Barry was a leader on anti-vaping legislation, she heard the concerns of common carriers who were key stakeholders in the issue, and made sure they were addressed,” Sculley stated.

Sculley concluded by highlighting the importance of the trucking industry. “More than 85 percent of Connecticut communities depend exclusively on trucks to move their goods. Trucks transport 94 percent of total manufactured tonnage in the state. The average 18-wheel tractor trailer pays more than $17,000 annually in state and federal road taxes,” he stated. “The trucking industry plays a crucial role in the Connecticut economy, and it pays a lot of taxes in order to do that.”

“We thank Representative Barry for supporting the trucking industry and look forward to working with her for years to come.”