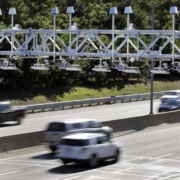 Gov. Ned Lamont has asked lawmakers to fast-track electronic highway tolls, reversing a previous position to let the issue slide for a special session after the June 5 adjournment of the General Assembly.

In meetings with majority Democratic leaders this week, Lamont asked for them to return his signature legislation to the front burner. Doing so would threaten hundreds of other bills that would die at 12:01 a.m. June 6 if they don’t get legislative approval.

“He reached out to leadership to see if there was one last try, to see if the votes were there for this session, and to not have to go into a special (session) for the issue of tolls,” said Sen. Carlo Leone, D-Stamford, co-chair of the Transportation Committee.

This change now puts extra pressure on lawmakers, including Rep. Roland Lemar, D-New Haven, Leone’s transportation co-chair, who would have to lead passage of tolls through the House, before the legislation can advance to the Senate. Lemar was told by legislative leaders on Tuesday to get ready to run the bill in the House, he said.

Lamont lacking on specifics over paid FMLA; Gets started on compromise
Scroll to top