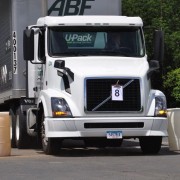 Under a bill signed Monday by Gov. Ned Lamont, the state will impose a new mileage-based fee on tractor-trailer trucks using Connecticut highways beginning in January 2023.

In an effort to support the state’s struggling Special Transportation Fund, the new law will assess a per-mile tax on big rig trucks which will scale with the weight of the vehicle. On the low end, the fee will be 2.5 cents per mile for trucks weighing between 26,000 and 28,000 pounds. The fee will scale as high as 17.5 cents per mile for trucks weighing more than 80,000 pounds.

State fiscal analysts expect the mileage tax to raise around $90 million a year, although revenues may be reduced somewhat due to a change approved by lawmakers that exempts some trucks transporting milk.

During a floor debate last month in the House, Rep. Sean Scanlon, a Guilford Democrat who is co-chair of the Finance Committee, said the bill asked large truck operations to chip in to finance road repair.

“We’re asking them to pay a small fraction on behalf of the wear and tear that they do so that we can make sure that our roads and bridges are not just in a state of good repair but that we actually can do the kind of investments that we need to do to improve our economy and grow our state,” Scanlon said in June.

However, on Tuesday Joe Sculley, head of the Motor Transport Association of CT, said comparable policies in other states have failed because they are difficult to enforce.