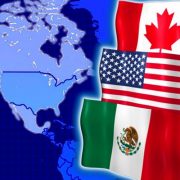 Excerpt from Transport Topics via Bloomberg:

President Trump should renegotiate Nafta in a way that builds upon — rather than hinders — the movement of goods and people between Canada, the United States and Mexico, the head of the U.S. Chamber of Commerce said.

“We would insist on doing it in a way that doesn’t disrupt the $1.3 trillion of trade that depends on Nafta” each year, Donohue said. “It’s our job to ensure that our leaders understand and appreciate how much of our prosperity is linked to this relationship.”

Donohue’s remarks, made before a scheduled meeting with Prime Minister Justin Trudeau, suggest Canada has some support from within the U.S. business community for the idea that the disadvantages of renegotiating Nafta may outweigh the benefits.

Pelosi, Democrats willing to work with Trump on infrastructure
Scroll to top