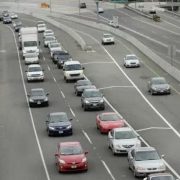 … Malloy last year said Connecticut would pay $300,000 toward a regional study of instituting a tax based on how many miles each driver travels in a year.

The idea is that those who drive the most — notably commercial drivers — would pay heavily, while those who use their cars for short and few trips would pay little. Republicans support legislation to block the study, saying Connecticut would never want such a tax.

“We know this doesn’t work. It would be an experimental tax,” said Joseph Sculley, head of the state’s trucking lobby. “Twenty other states have repealed this because it was too expensive to administer, because it discriminated against interstate commerce or because it was just evaded.”

Opponents say it would be impossible to tax out-of-state drivers, and that Connecticut motorists who drove in other states could be unfairly penalized. Any GPS-based tracking system would raise major privacy issues, opponents said.

“I don’t think technology is the answer,” he said. “You need a huge bureaucracy to try to enforce it.”

The committee isn’t expected to advance bills or vote them down until later in the legislative season.