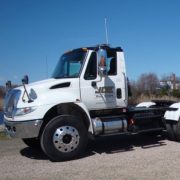 TFI International Inc. is closing its 150-truck Highland Transport division, a possible sign of softness in the Northeast freight market, according to a TFI official.

A trucking official in New England blamed some of the freight problems on people and businesses fleeing the Northeast because of taxes and regulations. Joseph Sculley, president of the Motor Transport Association of Connecticut, said state government leaders have failed to keep businesses and residents in the state.

Bloomberg News ranks Connecticut as No. 1 in outward migration of income in the Northeast.

Bloomberg’s analysis of state-to-state moves, based on 2017 data from the Internal Revenue Service and the U.S. Census Bureau, found Connecticut lost the equivalent of 1.6% of its annual adjusted gross income, or $2.6 billion. (Those moving out of the Connecticut had an average income of $122,000, which was 26% higher than those migrating in.)

The combination of fewer businesses and fewer residents creates a “smaller universe” in which to do freight business, Sculley said.

For that reason, for about a year, members of the Motor Transport Association of Connecticut have been telling Sculley that while the national freight market looks strong, they “have not noticed the same trends within the state of Connecticut.”

Rebuttal: Connecticut DOT does not have a car culture
Scroll to top