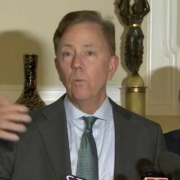 Gov. Ned Lamont was warmly greeted by Mayor Erin Stewart, the Republican who recently announced she would not challenge Lamont for governor in 2021. On Tuesday, they had common cause — if only to a point.

Stewart agreed to appear outside a gleaming new apartment building constructed on a city lot that she says was unmarketable until the construction across the street of CTfastrak, the busway much maligned in GOP circles.

The Republican mayor and Democratic governor each are boosters of transit-oriented development, a popular and politically safe approach to creating cities that are less reliant on gasoline-powered vehicles, the largest single source of greenhouse gases in Connecticut.

But Lamont has gone a giant step further by signing onto a regional Transportation and Climate Initiative as a way to reduce greenhouse gases and raise money for transit — a concept bitterly opposed by many leaders of Stewart’s GOP.

In promoting TCI, as the initiative is known, the Lamont administration is working to succeed where it failed horribly two years ago in seeking support for highway tolls as a means to modernize Connecticut’s creaky infrastructure.

And that brought him and Stewart to Columbus Commons, a new 80-unit apartment complex constructed on the site of the old police station, the first phase of a mixed-use development on Columbus Boulevard, across from the terminal of CTfastrak.

“It is the first ground up development that we saw in this city in decades — brand new, brand new housing, all because of the access to mass transit because of CTfastrak,” Stewart said.

Lamont, who announced his administration planned to use $3 million in pandemic relief to offer free weekend passage on CTfastrak and other transit buses over the summer, said he was trying to make transit-oriented development less abstract — and something worth funding.