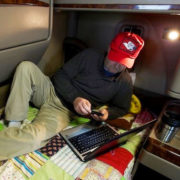 This legal alert has been written by MTAC partner Wilson Elser.

The Department of Labor issued an opinion determining that all time during which a truck driver is sleeping in a truck’s sleeper berth is non-working time that is not compensable.

The DOL’s opinion was initiated when a motor carrier asked the DOL for guidance regarding paying truck drivers for time spent sleeping in a sleeper berth. According to the unidentified carrier, the drivers are often in the truck’s sleeper berth: (a) not performing work, (b) permitted to sleep, and (c) not “on call” to perform work duties. In a typical week, the carrier estimated that a driver may work around 55 hours per week, and spend around 50 hours in the sleeper berth. The carrier asked the DOL whether it satisfied its federal minimum wage obligation under the Fair Labor Standards Act to its drivers by only paying the driver for the 55 hours worked.

The DOL concluded that its previous interpretation was unnecessarily burdensome for motor carriers. Instead, it favors a “straightforward reading of the plain language of [the regulation], under which the time drivers are relieved of all duties and permitted to sleep in a sleeper berth is presumptively non-working time that is not compensable.” It drew a clear distinction between on-duty sleeping time, and non-working time when the employer permits the employee to sleep in adequate facilities, the latter being non-compensable because it is presumptively off-duty.

Further, because WHD regulations classify sleeper berth time as non-working travel time, rather than on-duty sleeping time, such time is presumptively off-duty and non-compensable. The opinion continued by stating the presumption that non-working time in which the employee is relieved of all duties is not compensable holds true regardless of whether the truck is moving or stationary. Accordingly, the DOL determined the driver’s time in the sleeper berth was not compensable as the driver did not perform any work and was not on call to perform work. The DOL’s opinion concluded by stating “WHD is withdrawing the opinion letters” that conflict with this letter.

It should be noted that the opinion is not absolute as it provides several circumstances that would require a carrier to pay its drivers for time spent in the sleeper berth. First, drivers are considered to be “engaged to wait” and due to be paid if their time in the sleeper berth belongs to and was controlled by the carrier. An example of this scenario would be if a driver is required to wait at a job site for goods to be loaded into the truck. Second, if a driver is unable to use the time in the sleeper berth effectively for their own purposes, the driver needs to be paid for that time. The opinion notes that drivers who are required to remain on call, do paperwork, or perform similar activities while in the sleeper berth may be unable to effectively sleep, and as such, a carrier would have an obligation to pay the driver for that time.

The DOL’s opinion is overall a favorable turn in the debate on payment to truck drivers for sleeper berth time. It is consistent with previous DOL regulations, the overall weight of judicial authority, and the understanding of the truck industry. Further, the opinion clarifies previous court decisions by federal district judges in Arkansas and Arizona that truck drivers are entitled to compensation for time spent in the sleeper berth, though both decisions were preceded by federal cases ruling in favor for carriers. American Trucking Associations believe this opinion will help the industry better understand its compliance obligations prospectively, rather than settling such matters only after the fact.

Though this opinion by the DOL is legally non-binding, it will carry weight in court cases involving disputes over whether sleeper berth time is compensable. This decision comes from the agency that enforces the law and regulations and thus will give clarification to courts, as well as employers, to make certain they structure their operations to ensure that drivers are relieved from duty when they are in a sleeper berth.

More than 1,600 vehicles removed from roadway during safety initiative
Scroll to top