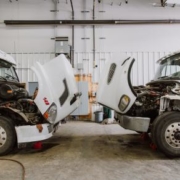 The Class 8 auction market heats up more each month, and retail selling prices continue to crush records as the industry stands at the confluence of a strong freight market, an inadequate supply of low- to average-mileage used trucks and a shortage of drivers.

J.D. Power Senior Analyst and Product Manager of Commercial Vehicles Chris Visser, a guest during FTR’s ongoing virtual State of Equipment series Monday, said “superheated rates” are keeping truck buyers energized, noting FTR forecasts rate increases to gradually relax and reach year-over-year parity starting in early 2022 while volume continues to grow into 2023. “In this market, we’re never going to have enough drivers to move the amount of freight that we have,” he said. “We’re really in a severe shortage of new trucks.”

The four-year truck trade cycle has been alive and well, Visser said, adding that 489,100 orders for trucks have been placed in the last 12 months with a bump in August due to the opening of model year 2023 build slots. However, OEMs have tamped down some of the enthusiasm as uncertainty surrounds the number of trucks they can actually build due to shortages of various components and workforce challenges.

Based on the number of trucks bought in model years prior, the supply of trades was naturally set to increase by roughly 20% in 2022, but Visser said the new-truck shortage will delay that increase.

Model years 2015 and 2016 are the most common trucks on the auction market, Visser noted, adding that if you can find three or four year old trucks at auction, be ready to pay upwards of $100,000 for them.