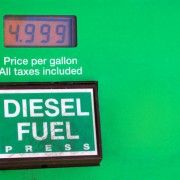 Excerpt from Transport Topics via Bloomberg:

“It’s something that I would certainly consider,” Trump said May 1 in an interview with Bloomberg News in the Oval Office, describing the idea as supported by truckers “if we earmarked money toward the highways.”

Trump released a tax plan April 26 that would cut the maximum corporate tax rate to 15% from the current 35%. The same reduced rate would apply to partnerships and other “pass-through” businesses.

He said he is willing to lose provisions of his tax plan in negotiations with Congress but refused to specify which parts. He also repeated his call for a “reciprocal tax,” which would be aimed at imposing levies on imports to match the rates that each country charges on U.S. exports.

“Everything is a starting point,” Trump said of his tax plan.

The Trump proposal also would eliminate the alternative minimum tax and the estate tax, cut individual income-tax rates and repeal an investment-income tax for high earners, fulfilling a conservative wish list from the past several years.

The one-page plan was silent on both a gas tax or the notion of a reciprocal tax. Trump said he has made no commitments on an increased gas tax but, “it’s something I would certainly consider.”