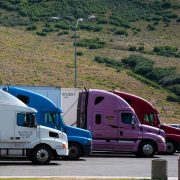 Big M&A deals are starting to roll in for the publicly traded truckload carriers. After months of management teams saying they would look to deploy their strengthening balance sheets on accretive acquisitions, the fruit is finally shaking loose from the tree.

Less than a week after Werner Enterprises (NASDAQ: WERN) announced it had acquired a couple of regional carriers in a $142 million deal with ECM Transport, the nation’s largest TL carrier Knight-Swift Transportation (NYSE: KNX) made a big splash Tuesday, acquiring less-than-truckload carrier AAA Cooper Transportation in a $1.35 billion deal.

The deal represents a big divergence for Knight-Swift, which generates nearly $5 billion in annual revenue from its trucking, logistics and intermodal segments, of which TL represented 80%. Following the transaction, Knight-Swift’s core TL business will only account for 63% of consolidated revenue.

The acquisition of Dothan, Alabama-based AAA Cooper gives Knight-Swift an immediate footing in the more than $40 billion LTL market. AAA Cooper runs a regional network of 70 facilities and 3,400 doors spanning from El Paso, Texas, to the Southern East Coast, along with multiple locations in the Midwest.

AAA Cooper is expected to record $780 million in revenue during 2021 and post an operating ratio near 90%. At a 2021 run rate of $140 million in earnings before interest, taxes, depreciation and amortization (EBITDA), Knight-Swift acquired the company and its fleet of 3,000 tractors and 7,000 trailers for less than 10x EBITDA.

AAA Cooper will operate as a stand-alone division of Knight-Swift with current CEO Reid Dove remaining in place. Dove was also appointed to Knight-Swift’s board.