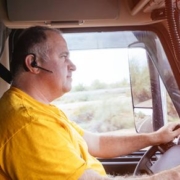 Commercial truck driver jobs are forecast to make some of the biggest gains if the Biden administration’s infrastructure package can get through Congress without major revisions, according to a report analyzing the plan.

The report, by Georgetown University Center on Education and the Workforce (CEW), was published just as President Joe Biden was releasing his American Jobs Plan last week. It is based on infrastructure-related policy data and information that the administration has made public over the past year, including the infrastructure plan Biden rolled out during the presidential campaign.

“Nothing in the package announced by the president last week changes our calculations in terms of jobs created or saved,” a Georgetown CEW spokesperson told FreightWaves.

If Biden’s $2 trillion infrastructure program is enacted, it “could put the United States back on a pre-recession job growth path and create and/or save 15 million jobs,” according to the report. It estimated that infrastructure jobs averaged 12% of all jobs in the U.S. economy prior to the pandemic. Mid pandemic, the number of infrastructure jobs in 2020 averaged 11% of all jobs, “reflective of the general malaise in employment across the labor force.” The report estimates that under Biden’s plan, infrastructure-related jobs would increase temporarily to 14% of the total job market.

“Transportation and materials moving” make up 60% of the infrastructure related occupations either created or saved by Biden’s plan, according to the report (see table below). Within that category, jobs for commercial drivers of heavy trucks and light truck/delivery drivers would account for 1.9 million and 901,300 jobs, respectively — roughly 2.81 million jobs total — which is close to 20% of the 15 million jobs estimated in the report.

The report also forecasts that the infrastructure jobs created or saved would be spread across the country. “In general, the job opportunities favor relatively more populated coastal states, but all stand to benefit from the infrastructure investment, including states that have not had as much economic growth as other states.”