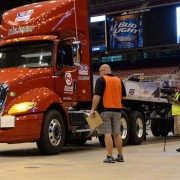 The trucking industry invests at least $9.5 billion in safety annually according to a report released June 29 by American Trucking Associations.

The investments include technologies on trucks such as collision avoidance systems, electronic logging devices for driver hours of service compliance and video event recorders. In addition, they include driver safety training, driver safety incentive pay, and compliance with safety regulations that include driver drug testing and records checks, according to the ATA report.

The investment numbers were based on data compiled in two industry surveys taken in 2014 and the fall of 2015, ATA said.