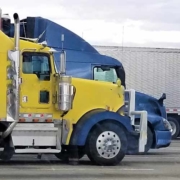 California’s new policies around clean air regulations on port operations could have profound consequences, according to Matt Schrap, CEO of the Harbor Trucking Association.

Beginning next year, the California Air Resources Board (CARB) is requiring semi-trucks and other diesel commercial vehicles to have engines with 2010 or newer model years in order to help meet new emission standards and improve air quality.

“Twenty-three percent of current cargo volumes are handled by trucks that have 2007 through 2009 engines, which will be required at the end of this year to turn over to at least a 2014 truck model year standard here in [the ports of Los Angeles and Long Beach],” Schrap said during a press briefing with the Port of Los Angeles on Aug. 17.

“Of total trucks in service it’s just around 5,000 vehicles that are registered to do business here, and those active vehicles [are] right around 3,500 to 3,600,” he added. “Suffice to say, removing a quarter of the capacity from the system could have profound impacts on our ability to get business done and move those boxes up the dock.”

Some truckers have noted the state’s strict environmental laws could affect their ability to carry cargo to and from ports.

“I can’t go into the ports because of the fact that my truck is an older truck, older model truck,” Alvin Carter, an owner-operator told Yahoo Finance. “But it has DEF (Diesel Exhaust Fluid), so it’s burning off. So why wouldn’t they allow me to go into the port? It hampers my earning potential.

More clean air rules are expected to take effect, which could further impact trucking operations at the port.

Starting in 2024, drayage trucks, also known as heavy-duty trucks, will need to start transitioning to zero-emission technology under CARB regulations, and all trucks operating at the ports will have zero emissions by 2035.