Blog - Latest News
You are here: Home1 / News2 / Truck restrictions on I-95 for DNC convention 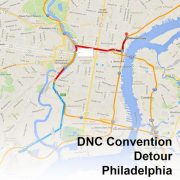 Commercial vehicles weighing more than five tons will be prohibited from traveling on Interstate 95 between Exit 13 (Interstate 76 West/Route 291/Valley Forge) and Exit 22 (Interstate 676) in Philadelphia from Saturday, July 23 at 12:00 PM, until midday Friday, July 29, the Pennsylvania Department of Transportation said today.

“The rerouting of commercial vehicles off I-95 is associated with the security for the Democratic National Convention,” said PennDOT Secretary Leslie S. Richards. “PennDOT and regional transportation partners will utilize a combination of electronic message boards and stationary signs to guide commercial truck drivers along alternate routes during this temporary restriction.

“We urge commercial drivers, if possible, to travel on interstate highways outside the Philadelphia region during the week of the convention to avoid being diverted off I-95,” Richards added.

Among the types of commercial vehicles to be restricted from traveling on this part of I-95 during the convention are delivery trucks, utility vehicles, parcel trucks, small dump trucks, buses, flatbed and stake trucks, refrigerated and box trucks, large delivery trucks, refuse trucks, cement mixers, buses, and all tractor-trailer combinations including double trailers.

In addition, motor homes and recreational trailers operated for personal use and weighing more than five tons will also be restricted from traveling on this section of I-95.

The following are the posted detours that drivers of vehicles over five tons will be directed to follow to return to I-95 once they exit the interstate:

In addition, the northbound and southbound entrance ramps to I-95 between Exit 13 and Exit 22 in Philadelphia will be closed to commercial vehicles over five tons. Commercial vehicles will be directed to use arterial roads to reach either I-95 north or south beyond Exit 13 or Exit 22.