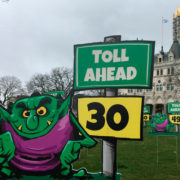 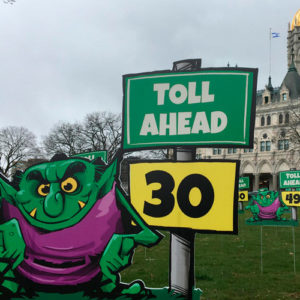 Seventy-two “toll trolls” were scattered along the lawn of the Connecticut State Capitol Tuesday morning. The green trolls, each holding a sign resembling an exit on a highway, represented a possible location for a toll along Connecticut highways based on a 3-year-old study commissioned by the Connecticut Department of Transportation. The Yankee Institute, a conservative think-tank based in Connecticut, arranged the display.

“We’re here to say not one cent more in taxes on the people of Connecticut,” said Carol Platt Liebau, president of the Yankee Institute.

Platt Liebau said Connecticut taxpayers have been asked to provide too much already in the state of Connecticut when it comes to property taxes, fees, and the income tax. Her group said lawmakers need to make other changes to state spending and borrowing before they enact any kind of toll collecting mechanism on the state’s highways.

“People in Connecticut say, we’ve already paid for these roads and again and again politicians have raided the Special Transportation Fund and used that money for other things.”

The Yankee Institute acknowledges that infrastructure repairs are necessary, but does not provide an alternative to tolls, something Rep. Tony Guerrera, the loudest voice on the issue, points out.

“Well, how do you want to pay for our infrastructure, then?” asked Guerrera, (D – Rocky Hill), who chairs the Transportation Committee in the General Assembly. Gov. Dannel Malloy advocated for providing new revenue to the Special Transportation Fund by installing electronic tolls by 2023, which he estimates could bring in as much as $600 billion to $800 billion in new revenues. Guerrera said it only makes sense to collect fees from drivers who currently get free rides through the state.