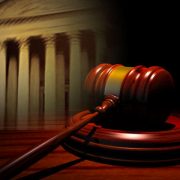 The injunction that bars California’s AB5 independent contractor law from being implemented in the state’s trucking sector will remain in place for now — and perhaps for the next several months.

That was assured Monday morning when the U.S. Supreme Court went silent on the issue when it released its “orders,” the long list of cases that it mostly denies certiorari of lower court appeals but accepts a small fraction.

Monday’s surprise was that the California Trucking Association v. Bonta, the organization’s lawsuit against the state over AB5, was nowhere to be found on the list. It wasn’t on the accepted list, it wasn’t on the denial list. Attorneys in the trucking industry were expecting some sort of resolution Monday, given that the case was on the agenda for a court conference last Thursday.

“We’re scratching our heads,” said Marc Blubaugh, co-chair of the transportation practice at the Benesch law firm. Blubaugh filed an amicus brief on behalf of the Intermodal Association of North America and the Transportation Intermediaries Association.

For trucking, the B prong of the ABC test is particularly problematic. The B prong says a worker can be an independent contractor if he or she “performs work that is outside the usual course of the hiring entity’s business.” An independent owner-operator hauling freight for a trucking company faces the probability that in litigation, that activity would be found in violation of the B prong.

An injunction handed down by a lower court in early January 2020, when the law went into effect, kept AB5 from being implemented in trucking because of a possible conflict with the Federal Aviation Administration Authorization Act, the so-called F4A. But an appeals court overturned that decision in April 2021, and the CTA requested the Supreme Court grant review.