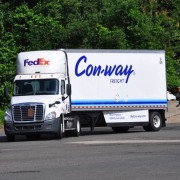 “September had a nice recovery after a significant decline in August,” ATA Chief Economist Bob Costello said in a statement. “The truck freight market continues to be bifurcated, with strength in retail and home construction, but some continued weakness in industrial freight.”

U.S. home construction continues as one of the bright spots of the economy, rising 1.9% in September to a seasonally adjusted annual rate of 1.42 million homes and apartments, the Commerce Department reported Oct. 20. That follows a 6.7% drop in August, and applications for building permits rose 5.2% to 1.55 million units.