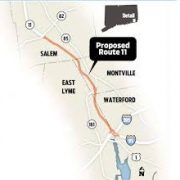 After millions of dollars and decades of studies, design work, lobbying by local officials, debate over whether it’s needed and the impacts it would have, the proposal to extend Route 11 beyond its abrupt end in Salem is dead.

The official death notice came earlier this month in the Federal Register, where the Federal Highway Administration published an announcement that it was canceling plans to undertake an environmental impact study on the project.

The study would be required before federal funds could be spent to build the approximately eight miles of new highway connecting the existing Route 11 to the Interstate 95-395 intersection near the East Lyme-Waterford town line.

The project, estimated to cost $1.2 billion to $1.5 billion, would have been paid for with a combination of state and federal funds. About $12.7 million has been spent by the state Department of Transportation over the last two decades on studies, plans and preliminary design work on the Route 11 extension, DOT spokesman Judd Everhart said.

Construction on the existing 8.5-mile highway from Colchester to Salem stopped in 1979.

Doug Hecox, spokesman for the FHA, said Monday that the agency decided to publish the notice, effectively signaling the project is no longer under consideration, after months of inaction by the Connecticut Department of Transportation.