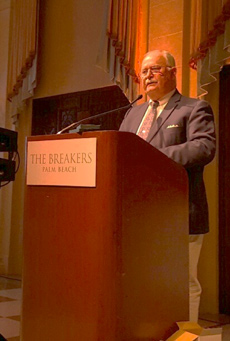 MTAC President Mike Riley – who will retire in January after 29 years of service to the association – received special recognition from his colleagues at their annual meeting in Florida, in early July.

TAEC Region 1 executives also recognized Riley upon his retirement. Bob Sculley, president of the New Hampshire Trucking Association presented Riley with a crystal decanter etched with the TAEC logo and the names of all the 10 states in Region 1.

Riley thanked his colleagues for the friendship and all that he had learned from them and told them that he would sorely miss the annual opportunity to interact with his peers from around the country.