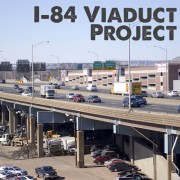 The proposed project to replace the two-mile-long stretch of elevated Interstate 84 known as the Hartford viaduct continues to move forward. This week MTAC staff participated in a meeting of the project’s Public Advisory Committee (PAC), a committee of which MTAC is an active member. State officials and consultants working on the project spent a lot of time discussing the option of replacing the highway with a tunnel. It was reported that the cost of building a tunnel would have a cost of $10-12 billion, more than twice the cost of any other option. Additionally, project leaders admit that the tunnel option does not create additional opportunity for economic growth, does not offer new north-south connections, potentially has significant property impacts, and has permitting challenges associated with conduit and power plant relocation.

According to those working on the I-84 viaduct project, the “lowered” highway option would cost $4-5 billion to build. Additionally, it could still be capped to create a “partial tunnel” which could allow for rebuilding of cross streets to accommodate bicycles and pedestrians; it would improve safety and highway efficiency, and better connect the Asylum Hill area with downtown Hartford. Traffic simulations show that both highway traffic and surface street traffic in surrounding neighborhoods would flow best under the “lowered” option.

PAC members took part in a couple of real-time polls at the meeting, and in one poll, a large majority of respondents (65%) indicated that they would be very comfortable in moving forward with the lowered highway option.

MTAC will remain actively involved with this project, will let members know when they can provide meaningful input, and will continue to push for inclusion of measures that would improve congestion, such as improving the I-84/I-91 interchange.