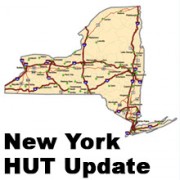 As you are likely aware, a recent Supreme Court ruling declared the fees charged for a HUT decal and certificate of registration as unconstitutional. The case was brought by the Owner Operators Independent Driver Association (OOIDA) on behalf of out-of-state trucking companies. New York has interpreted the ruling as prohibiting the Tax Department from charging the fees to out-of-state carriers, but believe they are still legislatively bound to continue to charge in-state carriers the fees.

As a result, the One Stop Credentialing and Registration (OSCAR) system is currently available only to carriers registering a New York plated vehicle. Those carriers will continue to be charged the $15 and $4 per truck fees. All other carriers must now file by mail, but there will be no fees collected. This is the short-term solution.

Late on Friday, NYSMTA learned what the potential long-term solution may be. As part of the Governor’s 30-day amendments to the 2016-17 NYS Budget, a proposal has been made to eliminate the $15 and $4 fees and replace them with a $1.50 per truck administrative fee. By making this change, New York would be in compliance with the decision of the recent Supreme Court ruling, and still be able to collect the fees from both in-state and out-of-state carriers, as this would simply be a fee to offset the cost of administering the HUT credentials, rather than to generate revenue.

If the proposal passes, it would become effective on April 1, 2016.