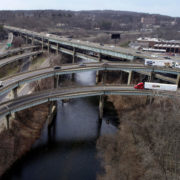 From the Hartford Courant.

The Waterbury Mixmaster — as the junction of Route 8 and I-84 is called — will eventually come down, the governor has said. But before it comes down, it must be propped up: The bridges’ concrete decks are cracking, their steel corroded, and the piers that support them are in need of repair.

Last month, the Department of Transportation awarded a Chicago construction company a $153 million contract to rehabilitate the Mixmaster’s bridges, wringing another 25 years of life from the heavily traveled interchange but also adding to Waterbury’s well-known traffic woes. Walsh Construction Company, which beat out five other bidders, will begin in May to overhaul 10 bridges that weave over, duck under and crisscross one another.

The renovations will take place just a few miles from an ongoing, $298 million project to widen a section of I-84 east of Waterbury. Commuting through Waterbury — already a slog with the I-84 widening project — is expected to become more difficult.

The project will require Walsh Construction to build three temporary bridges, two spanning the Naugatuck River and one crossing Freight Street, to divert traffic off the northbound side of Route 8. Route 8’s concrete deck, in the worst shape of the 10 Mixmaster bridges, needs to be completely replaced.

John Dunham, a district engineer who is among the DOT officials overseeing the project, said the agency preferred building the temporary bypass to shutting down the interchange on weekends. Had they taken that route, Dunham said, the Mixmaster would’ve been closed 25 to 30 weekends until the renovations were finished.

Along with the temporary bridges, DOT will close some lanes at night. Dunham predicted the lane closures would come from 9 p.m. to 6 a.m.

“There will be some impact throughout the next four years, but it won’t be permanent — I expect most of the work will be done at night, with some closures at night and on weekends,” he said.