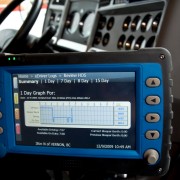 The Federal Motor Carrier Safety Administration (FMCSA) is expected to issue a final rule that will require Electronic Logging Devices (ELDs) on nearly all commercial trucks that operate in interstate commerce in the near future. The rule is expected to allow for two years of lead time from the date of issuance of the rule, so motor carriers subject to the rule will have time to comply.

Earlier this week, MTAC staff met with Chris Henry, the head of the Connecticut branch of FMCSA. Mr. Henry has committed to coming to the MTAC office to give an educational presentation on components of the ELD rule and how to comply. This event would be free of charge for members to attend, but would only be open to MTAC members in good standing. MTAC will keep its members posted on the release of the ELD rule, and the date and time of presentation, once that is scheduled.

Tolling Update: Following the meeting with FMCSA, MTAC also met with Amy Jackson-Grove, the head of the Connecticut branch of the Federal Highway Administration (FHWA). That meeting featured some discussion about the tolling of existing interstates, and that FHWA is currently studying the potential for congestion price tolling on I-84. Ms. Jackson-Grove is open to meeting again with MTAC staff in conjunction with members to discuss this issue, so MTAC may be contacting members soon to ask for participation in such a meeting.