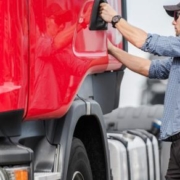 Ongoing concern about labor and management talks regarding two separate contract negotiations and a slowing U.S. economy resulted in a big drop in container volume at two of the nation’s biggest ports on the Pacific Coast.

“With cargo owners bringing goods in early this year, our peak season was in June and July instead of September and October,” Port of Los Angeles Executive Director Gene Seroka said during a media briefing. “Additionally, cargo has shifted away from the West Coast as some shippers await the conclusion of labor contract negotiations. We’ll do everything in our power to get that cargo back because the best route between Asia and the United States is straight through the Port of Los Angeles.”

Webinar: The future of Connecticut medium and heavy duty trucks and their f...
Scroll to top