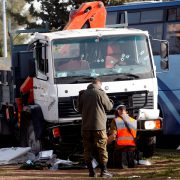 Connecticut truck drivers reacted after the Transportation Security Administration urged the trucking and busing industries to be on alert.

The new security alert said terrorists could be planning to steal trucks such as tractor trailers or school buses and use them in attacks.

Connecticut truck driver Tony Murray said he got the message.

The TSA said this type of terrorism has been on the rise in recent years. Its report warned that no community, large or small, is immune to what they’re calling “vehicle ramming attacks.” Since 2014, it said 17 attacks have been carried out with vehicles worldwide. In them, 173 people were killed and more than 650 were hurt.

The TSA is urging people to be on alert for strange activity that may signal a truck attack. The government said to be cautious of terrorists stealing trucks from professionals.

“We work long hours. Everyone wants to get back home to their families, so I think as a truck driver, you should be aware of your surroundings,” Murray said.

Joe Sculley is the president of the Motor Transport Association of Connecticut and he understands the importance of the message.

“Basically, watch for suspicious activity, here are things that could be considered suspicious,” Sculley said. “Here’s what you can do if you think something is suspicious.”

Sculley said he wants all companies to be vigilant with their fleets. Companies are also going deeper than looking at the three-year employment record.

“That’s a minimum, everybody does that. Many companies go up to and including criminal background checks,” Sculley said.

Note from MTAC: Follow the link to see a video of the news story, including an interview with MTAC President Joe Sculley. Additionally, click here to see a copy of the TSA security alert.

Change in process for Driver’s License renewals
Scroll to top