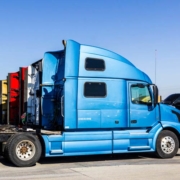 One year after Class 8 truck orders started to surge, preliminary North American order data for October surpassed 40,000 units for the eighth month in a row, according to two research firms that track orders.

FTR reports preliminary North American Class 8 orders for October at 43,000 units and ACT Research reports the number at 43,600 units. FTR notes that this is the eighth straight month that Class 8 orders surpassed 40,000 units. October 2018 orders were the 10th best on record, according to FTR — 2% above a strong September and 19% better than a year ago. ACT’s October Class 8 orders are up 1.9% from September, which is 21% more than the 2017 October numbers.

In the 12 months ending October, a 12-month record 510,900 units have been booked. In 2018, October had the third strongest order seasonal factor. As such, actual data receives a substantial haircut when seasonally adjusted. On that basis, October’s order intake drops to 37,800 units, down 26% from September.”