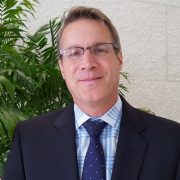 Christopher Spear was named president and CEO of American Trucking Associations, effective July 9, succeeding Bill Graves. ATA made the announcement July 1, when it introduced Spear to the staff at the federation’s Arlington, Virginia, headquarters. Spear was given a five-year contract and chosen from a field of about two dozen candidates, according to ATA Chairman Pat Thomas. ATA had been looking for a new CEO since October, when Graves, 63, announced at the end of ATA’s Management Conference & Exhibition that he would leave at the end of 2016. He is staying on for the remainder of this year as an adviser

“I’m honored to have the opportunity to lead this great association and serve this vital industry,” Spear said. “Trucking is the backbone of our economy and a catalyst for American job growth, delivering critical goods to businesses and homes coast-to-coast. I am excited to work alongside ATA’s members and federation partners to ensure the industry continues to prosper and safely move our nation forward.”

MTAC President Joe Sculley said that ATA made a great choice in hiring Chris Spear as the next president, and that he looks forward to working with Mr. Spear to advance the goals of the federation.