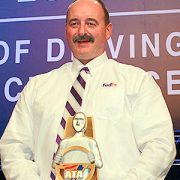 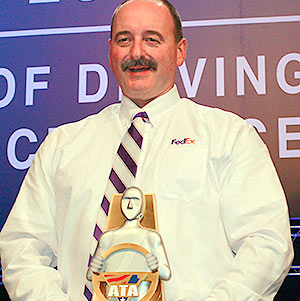 When Roland Bolduc heard that the winner of this year’s National Truck Driving Championships was from Massachusetts, his jaw almost dropped to the floor.

Bolduc had just been named the winner of the sleeper berth class at the awards banquet after three days of competition. And, a few minutes later, he heard his name again. After hugging his family, the FedEx Express driver from East Longmeadow rushed to the stage to be greeted by a standing ovation.

The roomful of competitors, family members and industry dignitaries loudly cheered their “Best in Show” Aug. 12. In his speech, trucking’s newest top driver emphasized the industry’s highest priority as he stood tall to address his comrades at this culmination of the “Super Bowl of Safety.”

“We gotta stay safe, and we gotta keep safety as a frame of mind. That’s Rule No. 1. And we all know it and we all get it,” he said, while stressing the value of teamwork.